In the biography section of Mack Sennett's Fun Factory, I include some previously unidentified credits by some Mack Sennett performers in Laurel and Hardy comedies. I've shared these--as well as some other previously uncredited L&H appearances by other performers--with my good friend Randy Skretvedt, who is currently working on a greatly-expanded edition of his standard-bearing book "Laurel and Hardy: the Magic Behind the Movies" which should be coming out soon. (This link is to the second edition--the most recent version now in print; however, with all the additional details and information Randy is adding to the book, his third edition is going to be well worth the wait!) However, I did want to give some details here about one particular Sennett alum who pops up in a number of shorts and features starring Stan and Babe.

First of all, it is important to note that many of the performers who appeared in Laurel and Hardy's classic Hal Roach comedies had previously worked in Keystone or Mack Sennett Comedies. Among them were Stan and Babe's arch-nemesis James Finlayson, who had originally made his name as a slippery Sennett villain. The "ever popular" Mae Busch and her SONS OF THE DESERT "brother" Charley Chase were originally teamed in a series of 1915 Keystone Comedies. Chase, then Charles Parrott, had once worked in the vaudeville troupe of fellow 1915 Keystone actor Harry Bernard--the same Harry Bernard who later became a reliable L&H player. Edgar Kennedy started at Keystone in 1913, and Thelma Hill, Blanche Payson and Bobby Dunn also gained their original fame while working for Sennett years prior to their brushes with L&H.

Another performer who made the transition from Sennett to Roach (and to Laurel and Hardy comedies), was Leo Sulky (1874-1957). Originally a Chicago-based vaudevillian (appearing in Alice Howell's CINDERELLA CINDERS two-reeler, shot in that city before he moved west), Sulky appeared in many Sennett comedies of 1924-1927, starring Harry Langdon, Billy Bevan, Alice Day, Ralph Graves, Ben Turpin, and others. For instance, in Langdon's BOOBS IN THE WOOD, he has two roles--as a poker dealer and a mean bar patron called Tough Mike. He plays a Kentucky sheriff in THE IRON NAG with Billy Bevan, and was frequently cast in officious roles.

After seeing Sulky in dozens of Sennett comedies, I began spotting him--with his distinctive moon face and light eyes that were almost transparent--in comedies by other filmmakers (including Fox Sunshine and the Weiss Brothers), as well as feature films of the 1920's, 1930's and 1940's. Since many of these were "face bits", and he did not speak dialog, Leo often did not receive credit in casting directories. Thus, a relative handful of his film appearances were documented, and only a fraction of his credits appear on imdb.com.

Among the features in which I've spotted Leo Sulky are SVENGALI (1931) with John Barrymore (as a Moroccan waiter), THE MOUTHPIECE (1932) with Warren William (where he is a courtroom extra), the Preston Sturges-scribed THE POWER AND THE GLORY (1933) (as a strike leader during a montage sequence), the second version of THE MALTESE FALCON, SATAN MET A LADY (1936) (as a bartender) and the Jack Benny-Fred Allen vehicle IT'S IN THE BAG (1945) (as an elevator extra).

I also began spotting Sulky in a number of Hal Roach comedies of the late 1920's and early 1930's, featuring Charley Chase, Our Gang Thelma Todd and ZaSu Pitts, the Taxi Boys. and Laurel and Hardy. However, if your are a devotee of Stan and Babe, you can be forgiven if his name doesn't ring a bell. Leo Sulky has previously only been identified as a courtroom extra in the feature OUR RELATIONS (1936). However, I've spotted him in a number of others, silent and sound, including at least two where he appears in stills but not the final release. 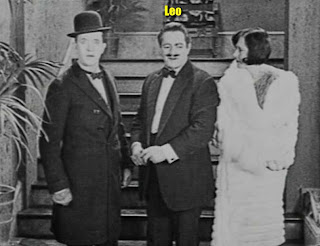 HABEAS CORPUS (1928): Leo Sulky can be seen as a detective in a still from a deleted sequence (also involving Richard Carle) which appears on p. 131 of the original edition of Randy Skretvedt's book. This scene does not appear in the final film, not does Sulky. 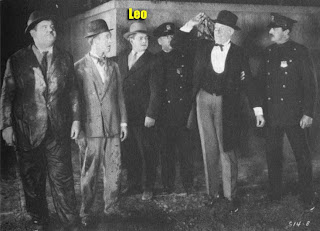 THE HOOSEGOW (1929): Leo Sulky appears as a prison guard standing next to Tiny Sandford when Stan and Ollie arrive at the facility via paddy wagon, just before Tiny goes over to confront the boys (who've received apples to use as a signal for a jailbreak attempt). 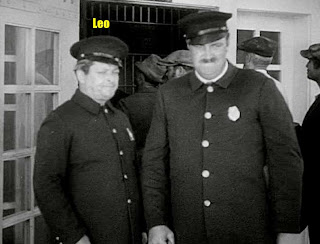 PARDON US (1931): Two years after THE HOOSEGOW, Leo Sulky almost made a second appearance as a prison guard opposite L&H, in the boys' first feature film. However, this sequence was edited or reshot--as in the final film Stan and Ollie sit at the mess table on their own, and Sulky is not seen. However, they are later approached by another guard, Tiny Sandford--who'd previously played a guard with Sulky in THE HOOSEGOW. 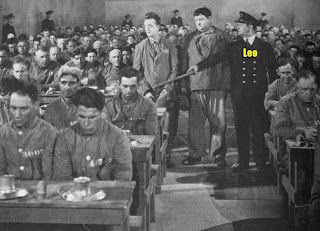 BEAU HUNKS (1931): Leo Sulky played two different extra parts in L&H's four-reel featurette. In the first role, he is a Legionnaire at screen right of the Fort Arid commander (Broderick O'Farrell) after the visit by the Riff-Raff chief, and before Stan and Ollie arrive at the gates through a sandstorm. 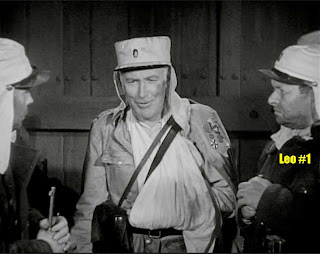 Leo Sulky shows up a bit later in BEAU HUNKS, this time as a "riff" soldier standing behind the Riff-Raff chief (director James W. Horne) after he gives the command "onward," to attack the fort. 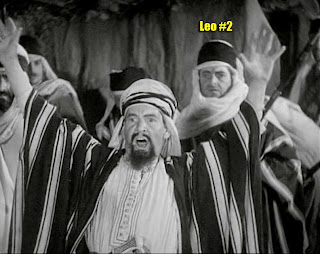 OUR RELATIONS (1936) : Finally, there is Leo Sulky's appearance in the one Laurel and Hardy film for which he's been previously credited. He plays the courtroom extra in the feature, sitting in the second row nearest the door where Mrs. Laurel and Mrs. Hardy (Betty Healy and Daphne Pollard) make their entrance. 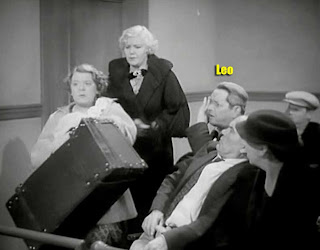 Leo Sulky continued doing face bits and dress extra work into the 1950's, when he appeared at several Mack Sennett Alumni Association gatherings prior to his death in 1957. Below, Leo dons Keystone Cops gear with James Finalyson, Mack Sennett and others at the 1950 Mack Sennett alumni reunion in Simi Valley, California. Mack Sennett sits in the chair. Above him, left to right, are Charles Lynch, Max Asher, Hank Mann, Vera Steadman, Leo Sulky, James Finalyson (dressed in his Sennett villain guise) and Charles "Heinie" Conklin. 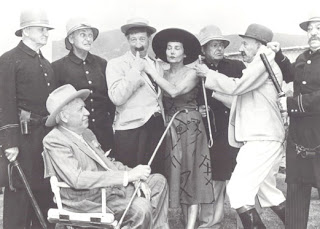