. In the caption below it, I credit the film's star Hank Mann (right), Gonda Durand (center) and Tom Kennedy at the left. From my research sources, I knew Tom Kennedy was credited with playing the blacksmith in the film. And I listed Kennedy with some trepidation, as it did not look like Kennedy to me--however, I thought it might just be a weird angle. 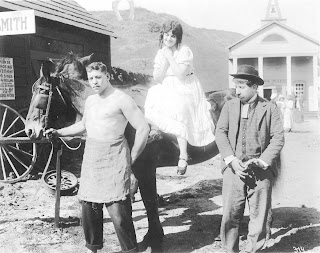 However, my two learned comedy colleagues, Richard Roberts and Steve Rydzewski, each (independently) corrected me with their recognization that it is actually Noah Young--the strongman comedian best known for his work at Hal Roach Studios, particularly in the comedies of Harold Lloyd. In fact, Noah Young worked almost exclusively at Roach from 1918 until 1935, with only a few exceptions. After Richard first mentioned it to me, I could have kicked myself. I had seen Noah many times over many years, and by all rights should have recognized him. However, I was perhaps blinded to the fact that Young might have worked at Keystone prior to Roach. I had never seen him mentioned in any association with Mack Sennett or Keystone. 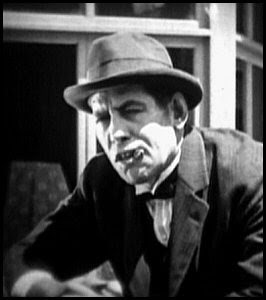 However, a quick look at his background puts it all into logical perspective. Noah Young was a record-setting weightlifter who competed for the Los Angeles Athletic Club, in the years prior to THE VILLAGE BLACKSMITH being filmed in January 1916. Mack Sennett resided at LAAC during this period, and hired many of the athletic club's boxers, swimmers and high-divers to work in his films, as performers and stunt men and women. On August 5-6, 1915, at the Panama-Pacific Exposition in San Francisco (where MABEL AND FATTY VIEWING THE WORLD'S FAIR IN SAN FRANCISCO had been filmed five months earlier), Young broke two weightlifting records and captured first place in all five events in which he competed. 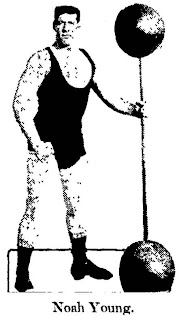 From there, he must have been hired by Mack Sennett. Though he appears to be playing a blacksmith in this still, it is not clear if he, in fact, replaced Tom Kennedy in the chief blacksmith role, or if perhaps Young plays a second blacksmith--perhaps a smaller role in which he had a chance to demonstrate his strength. Since the film is not known to exist, it is also unconfirmed as to whether Young actually ended up in the final release print. However, by mid-March, when the film was released, it had been announced that Noah Young had joined a circus--meaning his stay at Keystone was relatively brief. Though Young had much coverage in the Los Angeles Times from 1914 to 1916 for his LAAC weightlifting exploits, this circus announcement marked his last appearance in that paper until March 1918, making it likely that--between that time--Noah travelled the country performing his feats of strength under the big top and was not in Los Angeles.

Shortly after returning to Los Angeles in March 1918, where he re-established the Los Angeles Athletic Club as his training base of operations, Young began to appear in the comedies of Harold Lloyd. These one-reelers, such as THE NON-STOP KID and KICKING THE GERM OUT OF GERMANY, had always been believed to have been Noah Young's film debut. However, thanks to the eagle eyes of Richard Roberts and Steve Rydzewski, we now know that he may very well have made his first movie two years earlier--at Keystone.
Posted by Brent Evan Walker at 2:21 PM